PROSECUTED BUT NOT SILENCED
By Maralee Mclean 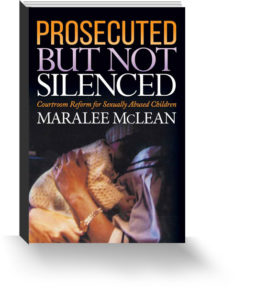 uted but not Silenced, Maralee McLean exposes the dirty secret that most of the public is blissfully unaware of. The secret is that our custody court system routinely fails to protect children from dangerous abusers and especially sexual predators. Although mothers make deliberate false allegations of abuse less than 2% of the time, 85% of child sexual abuse allegations result in custody to the alleged abuser which means the courts are sentencing many children to a childhood living with their rapists.

Denying the courts could be hurting so many children is the natural reaction of court officials, the media and the public. Prosecuted but not Silenced provides an important service by drawing attention to this incredibly cruel scandal. The author’s story helps bring attention to the need to reform custody courts and illustrates how such tragedies are permitted to continue. Some people may have trouble believing the events described in the book are true, but we have seen the unbelievable play out in the broken custody court system all too frequently.

There is a fundamental dilemma in telling the story of the failed custody court system. Describing the details of a very personal story has tremendous personal interest and it is human nature to want to protect the child victims. At the same time the reader might wonder if the descriptions could really be accurate or if the case is a rare exception. There is an enormous tendency to want to blame the mothers who are victims of their abusers and then the courts. Alternatively, the author can focus on the research and show the patterns of unqualified and biased professionals and harmful outcomes in which children are not protected. This eliminates the idea that the case was an exception or was caused because there was something wrong about the mother. The problem is that statistics tend to be dry and don’t hold the readers’ interest. Maralee McLean made the good choice of including both the personal story and placing it in the context of scientific research. The most useful parts of the book are when she puts this tragic story in context and I wish she would have done even more to put her story in the pattern of tragic cases.

A Day in the Life of Ivan Denisovich is a powerful story of a prisoner in a Soviet forced labor camp during the height of Communist Control. Alexander Solzhenitsyn describes an incredibly painful and horrendous situation and yet keeps reminding the reader that he is describing one of the better days. We don’t want to imagine what a bad day would be like. In the same way, Maralee McLean had a lot of advantages that most protective mothers would envy. By far the outcome in her case is not among the worst. And yet she and her daughter experienced horrific abuse at the hands of the father and the court professionals. Even exposure on the CNN documentary which so many protective mothers unsuccessfully seek did not force the court to correct its errors.

For significant stretches of time, the author experienced a classic harmful outcome case. These are decisions in which an alleged abuser wins custody and a safe, protective mother who is the primary attachment figure is limited to supervised or no visitation. A recent research study for the US Justice Department demonstrates that these extreme outcomes are always wrong. The harm of separating a child from her primary attachment figure, a harm that includes increased risk of depression, low self-esteem and suicide when older is greater than any benefit the court believes it is providing. In most cases the extreme outcome is indicative of the use of very flawed practices so that the opposite outcome would probably have benefited the child.

Warning, many parts of this book are painful to read. Anyone who might be triggered because of traumatic experiences in their life should consider whether it is safe to read it. Bupaypalt I hope the public will become familiar with this story and it will move them to demand the needed reforms. Clearly the pain in reading the story is a tiny fraction of the pain experienced by the children the courts fail to protect.